Anyway, this is a whitening line which uses Kiwi. Kiwi is an excellent source of vitamins. Gold kiwi has the most concentrated phenol content and also has the highest antioxidant properties compared to other Kiwis.

Here is an extract of the studies on Gold Kiwis :

So you know the old adage – “an apple a day helps keep the doctor away”, right? Well, when it comes to heart health it appears the better option is gold kiwi fruit by a long-shot, so says a new study published this month in the journal Biological and Pharmaceutical Bulletin.

In particular, the study team desired to know which of the fruits had the highest concentration of polyphenols (powerful antioxidants that offset the effects of molecules known as free radicals), which were most effective in reducing lipid oxidation (the process whereby fatty acids are turned into free radicals that damage cells), and which were most effective in eliminating free ranging hydrogen peroxide (another type of free radical produced as a byproduct of the body’s process to create and use energy at the cellular level).

People with high levels of unhealthy lipids (LDL cholesterol) in their blood serum (oxidized LDL in particular) are considered at high risk for cardiovascular conditions such as atherosclerosis, heart attacks, strokes and other maladies. By reducing the amount of oxidized lipids and the number of other free radicals in blood serum, physicians believe people can significantly reduce their risk of heart disease. A common way to reduce free radicals and oxidized lipids is to consume more antioxidant rich food, hence the interest of the researchers in these fruits.
The short takeaway – gold kiwi crushed the competing fruits on all measures. In fact, apples came in dead last on every measure!

For example, to assess polyphenol content, the researchers cut equal weight pieces of each fruit flesh and blended in a mixer for about 30 seconds. The blended fruit juices were then processed through a centrifuge for 10 minutes and subsequently strained through a filter. The strained juice was centrifuged again – this time for one hour – and then samples were taken of the remaining, centrifuged juice.

Using this method, the researchers found that gold kiwi’s polyphenols content was approximately 1.04 milligrams per milliliter, green kiwi was second with 0.85 mg/ml, navel oranges were third at 0.80 mg/ml, while apples were dead last at 0.13 mg/ml!
To assess the antioxidant properties of these polyphenols, the researchers then mixed a 1% concentration of the fruit juice solutions with lipids from egg yolk and then irradiated the mixture for various time intervals (irradiation via UV rays causes the lipids to oxidize). After irradiation, the study team examined the counts of oxidized lipid molecules remaining in the respective fruit juice mixtures. They found gold kiwi and navel orange both inhibited oxidation of 60% of the lipids. Again, apples were dead last at 23%.

The study authors concluded, “Therefore, we propose the novel possibility that daily consumption of kiwi fruit is effective on decrease of oxidative stress and further prevention of disease by excessive oxidation…All these indicators showed the highest activity for gold kiwi, demonstrating that gold kiwi has strong anti-oxidant effects. Overall, green kiwi had lower anti-oxidant effects than gold kiwi, but had stronger effects than the other fruits.”

So, if you’d like to add an easy, tasty and heart healthy fruit to your daily diet, consider gold kiwi. It’s a little more challenging to find in a retail grocery store (and a little more expensive to buy) so you may need to look for it in a specialty/gourmet food store.

According to the prime producer of gold kiwi fruit, a New Zealand company called Zespri, the biggest difference between the green and gold kiwi is taste, “ While green kiwifruit has a tangier, more tart flavor, gold kiwifruit is mellow and tropical, a mixture of mango, melon and citrus flavors. People who find green kiwifruit too tart usually love gold. As for other differences, the color is gold, instead of green, and it is tear-drop shaped, with a smooth skin and a crown on the top. Finally, while you might need to wait a few days for green to ripen, gold kiwifruit is always ready to eat.” ² 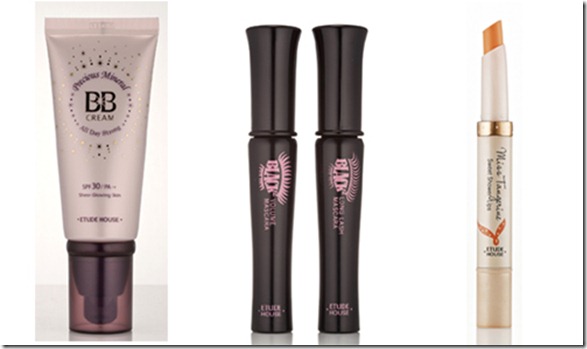 To welcome Spring, korean cosmetics are launching a war against each other.

The spring focus is on 3 things – BB Creams with UV protection, wrinkle and whitening products, pre-make up products!

So what are the top 3 products recommended by these Korean cosmetics ?

Find out below here!

Skin Food will be releasing 10 kinds of lipstick titled the ‘Vita Tok Lipstick’.

The 10 lipsticks are enriched with Vitamin A,C and E to protect and nourish your lips. Macadamia Nut oil extract is also included in the formulation.

10 flavours and colors of the lipstick will be available.

It’s purpose is to eliminate odour and the bacteria that causes it. All you need to do is spray the deodorant in your shoes/boots.

The spray contains green tea extracts which acts as a natural antibiotic that protects the skin without irritating it while inhibiting bacteria and microorganism growth which causes foul odour.

Avocado Essential Oil will be suitable for all skin types, even for sensitive skin. Avocado oil nourishes the skin intensively and forms a film to prevent moisture from escaping, giving you moist skin. Pumpkin, bamboo, water lily and lotus extracts work together to help sooth the skin.

The Avocado Multi Balm contains avocado oil and is an all purpose balm which can be used on face, lips, elbows, heels, knees, hair, and parts of extreme dryness.

Avocado oil is a rich heavy oil, that is deeply penetrating and rich in vitamins A and D, lecithin, potassium as well as vitamin E.

The crude Avocado oil is green in color as it still contains chlorophyll and is classified as a mono-unsaturated oil.

It is often used for clients with dry or mature skins, or people suffering from eczema or psoriasis, and is very useful when treating sun or climate damaged skin that is dehydrated and undernourished as it is said to help with regenerating the skin and softening the tissue.

Like olive oil, avocado oil is one of few vegetable oils not derived from seeds; it is pressed from the fleshy pulp surrounding the avocado pit 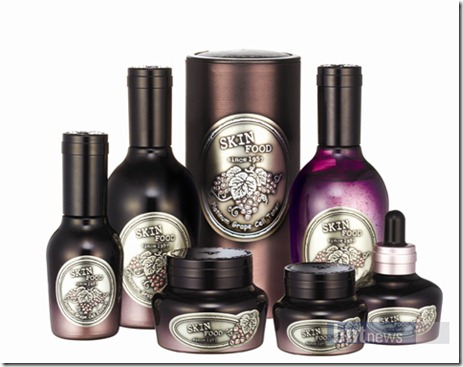 As 2010 comes to an end, Korean skincare/cosmetic companies have ranked their Best-Selling items throughout 2010.

Did your favourite Korean skincare products made it into the top 5?

END_OF_DOCUMENT_TOKEN_TO_BE_REPLACED

Cosme.net is Japan’s biggest and most prestigious cosmetics website. It hands out its awards which is based on the average reviews collected and the overall points each product received in a year. It receives about 8 million reviews each year.

Which products won this prestigious Japanese Awards? Click here to find out  END_OF_DOCUMENT_TOKEN_TO_BE_REPLACED

Skinfood will be releasing a line of tissue sheets featuring a variety of ‘food’ ingredients :

Also, there will be a few new products for the body to combat the harsh cold dry winter season : 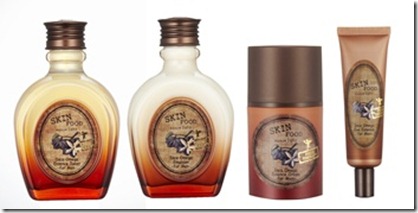 So what exactly is the INCA Omega Oil ?

This vegetable oil is extracted from the seeds of the Sacha Inchi plant, a small plant that produces mall hermaphrodite flowers producing small pods which has usually 6 lobes. This plant is cultivated mainly in Peru at the heart of the Inca culture. Inca Omega Oil contains one of the highest amounts of polyunsaturated fatty acids among all oily seeds used for human consumption. It reaches an average of 48% content of alfa-linolenic acid (omega 3) and an average of 37% content of linolelic acid (Omega 6). Additionally it also contains 8% of Oleic Acid (Omega 9).

Not only that, it is also very high in Tocopherol ( Vitamin E) concentration.

Products in the INCA Line will include :

Also, Skinfood will also be launching it’s first cosmetics make up line at the end of the year.  Pearl with be the highlight of the line.

The makeup line will include